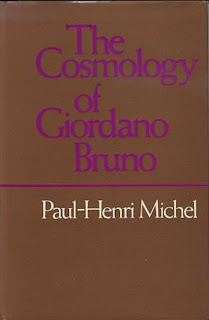 One summer long, long ago and far, far away,  I went to the Houston Public Library. It was a way for my mother to get me out of the house and silence my  complaints that there was 'There's nothing to do.' It was before kids with similar complaints could find relief in a game console.

In my desultory browsing I found a book with an intriguing title, The Cosmology of Giordano Bruno by Paul-Henri Michel. I was obsessed with cosmology and had been since my my dad had given me a subscription to a children's science magazine on my tenth birthday, the same birthday that I'd been given my first telescope.

My odd slightly  neurotic preoccupation with the univese was a lot like Woody Allen's in Annie Hall.  So when I found a whole book on the enigmatic subject, I was immediately enthralled  and decided to try reading it, even though its adult vocabulary made was a bit of a  hard slough for me. Within the first  five pages I was hooked. I found a comfortable chair facing a large window, and  read for hours. Whenever I looked up, I'd see hard-hatted workers  in the massive highrise, which was under construction  across the street from my window, flying paper air planes and leaning out to see if their latest attempt was more air worthy or not.

It seemed to me to fit with what I was reading. I read to page 179 before my mother came to collect me. I stopped with this sentence, "The Earth, the Moon, the Sun and the planets are so many 'worlds' which. taken together constitute a 'system' and any organism whose laws we are permitted to know... consequently, there is a plurality of worlds in a universe which is unique because nothing exists outside of it."

That was my first introduction to Giordano Bruno, and I've been intrigued by him ever since. So much so that I've been to Rome four times on the anniversary of his being burned alive by the Vatican on the 17th of February 1600.  He still intrigues me, and I've noticed that with the recent discovery from NASA of so many exoplanets [which predict that there are prehaps as many as one for each star in our galaxy], Bruno seems more topical then ever. It will be 412 years since he was burned alive for holding what the Catholic Church claimed were heretical ideas.

Since no one reads this, I will likely use this forum to think aloud about how culture views of Bruno have changed since he was first widely reintroduced by Frances Yates, who was a brilliant scholar, but was almost certainly mistaken when she painted him as a magical thinker seeped in medieval tinged hermetics.  It took a number of years before Bruno's image was revised through the thorough new interpretations by Hilary Gatti, Ingrid Rowland and others.
Posted by 2bsirius at 05:43